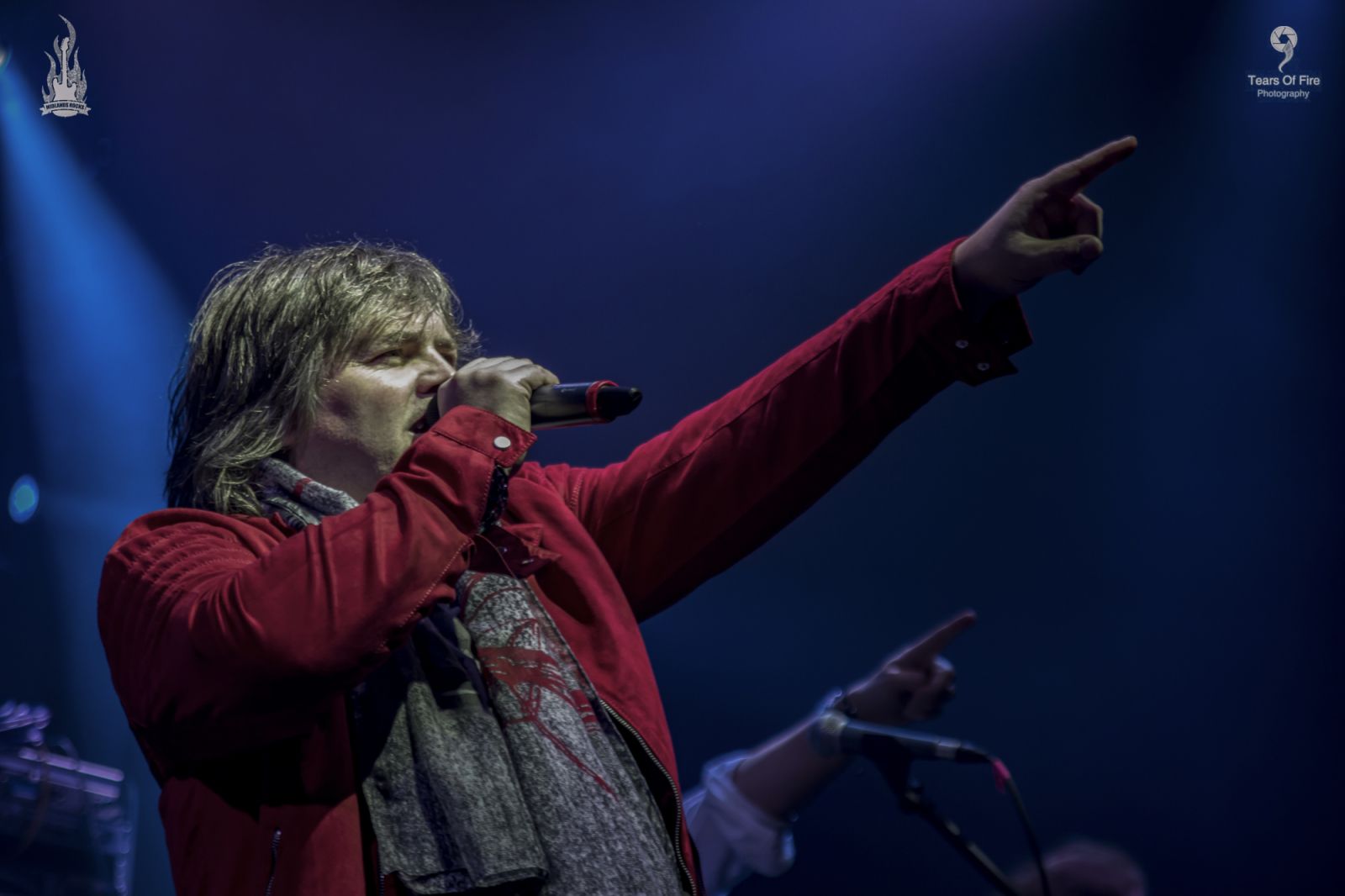 Peter started out singing with Guliano Gizzi in what would eventually become GUN. In 1986, he recorded an album with London band, L.A. Secrets, that included Laurence Archer and Clive Edwards (Grand Slam, UFO, Wild Horses). Later that year he joined Moritz.

In 1989, while Moritz were taking a long break from touring and writing, Peter was approached by Paul Samson to join his band Samson and was immediately involved in writing and recording the "Look to the Future" album that was scheduled for an autumn release. The band recorded a session for Tommy Vance's Radio 1 Rock Show including a jingle that was used until the show was taken off the air. They headlined the Astoria in London and their album, "Refugee", was released a year later following a remix by Paul Samson.

Peter came back to work with Moritz when they reformed in 2010. He teamed up with Greg Hart (Cats in Space) to write and record the "Undivided" and "SOS" albums as well as perform them live on tour. Later he was involved in writing and recording Moritz's latest album "About Time Too".

As well as being the vocalist for Moritz, Peter also sings with Chris Glen (SAHB / MSG) in his band Chris Glen & The Outfit and The Brian Rawson Band. 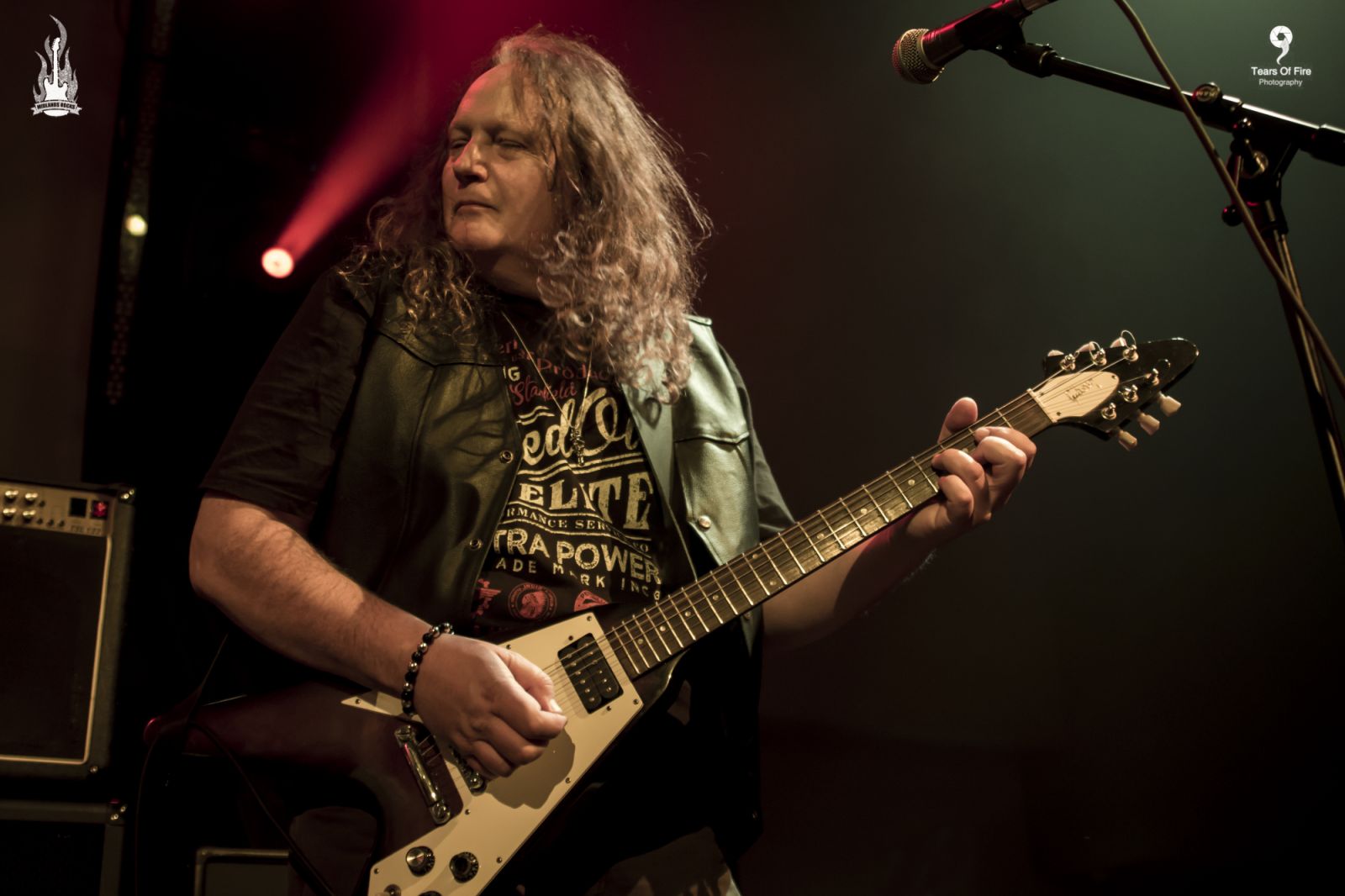 Mike is a highly accomplished guitarist and a founder member of Moritz. He played in several bands with Ian during the early 80's before linking up with Greg Hart and Andy Stewart to form Moritz at the beginning of 1986.

In the 90's he founded the well known Queen tribute band The Bohemians, with Kenny Evans, before a 10 year hiatus from playing to help raise his two sons.

Mike was delighted to be part of the reformation of Moritz for the Undivided album in 2010 and continues to love recording and gigging with the band 32 years down the line from where it all started. 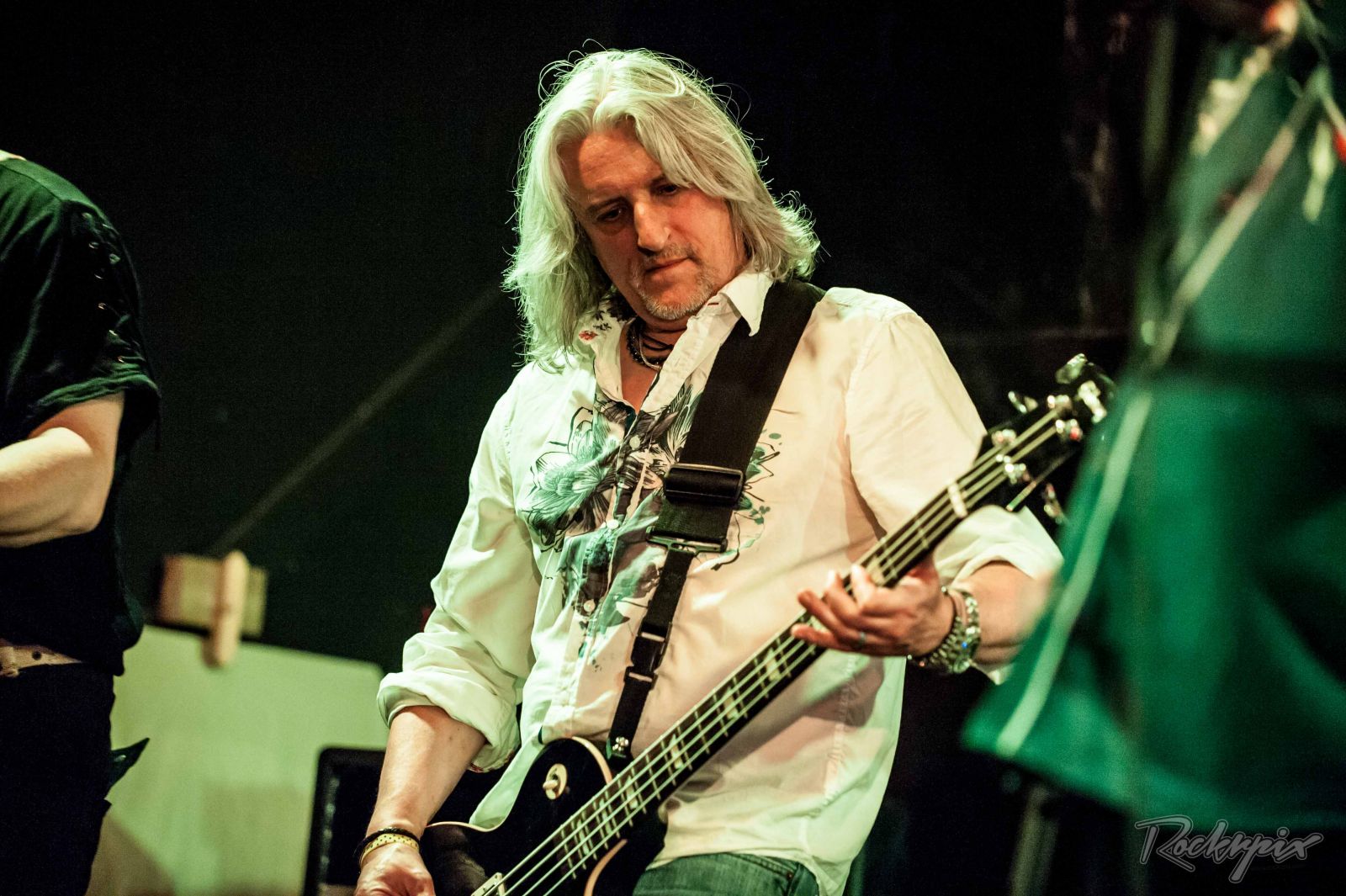 Ian is another founder member of Moritz and is also one of the main songwriters. His roots lie in 70's classic rock and prog with a wide range of other musical influences.

In 1989 he formed AOR band If Only with Moritz members Greg Hart and Andy Stewart (both Cats in Space) and female vocalist Jackie Bodimead (Girlschool). In 1992 they released an album entitled Bed Of Roses which was produced by Geoff Downes (Asia).

He has toured the university circuit with the rock covers band The New Originals with Mike White (Samson/Empire) and Gem Davies (FM).

As well as being a great bass player, Ian is a highly accomplished keyboard player, putting keyboard tracks onto Moritz's albums About Time Too and SOS. He is also a highly experienced sound engineer, mixer and producer. 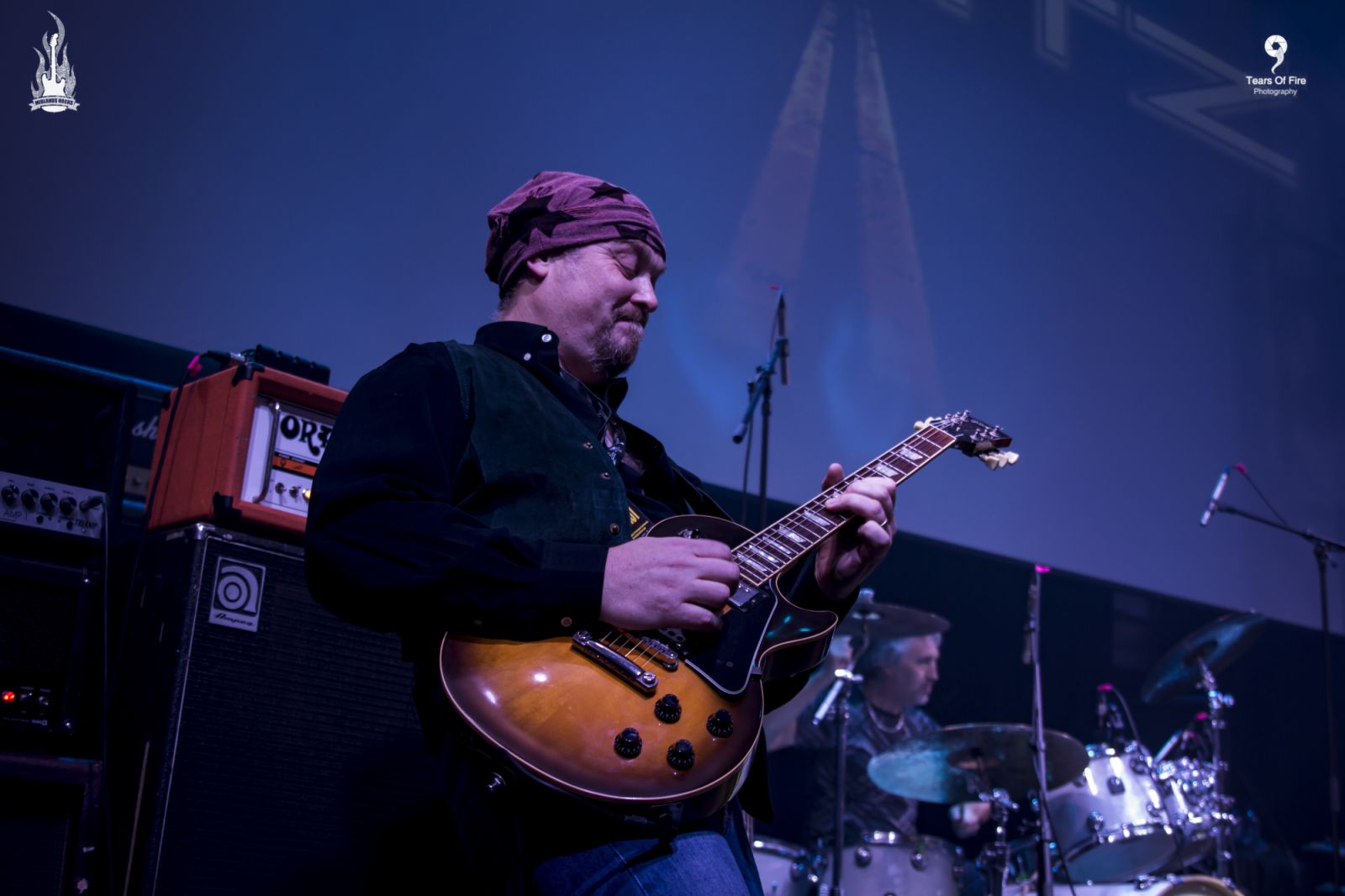 Kenny has known members of Moritz for over 25 years. As well as being a highly experienced guitarist of over 30 years he is also a highly skilled film director and was enlisted into the band during a line up change in 2015 after having directed the Shoud’ve Been Gone video. He has also directed all of the Cats In Space videos from their first album due to his Moritz Connections.

He has also featured as a drummer in bands such as The Bohemians and was the front man for legendary London circuit band Project X. He has also worked as a crew member with Queen, Mike and the Mechanics and Fish. For the last 20 years he has had close links with the SAS band and as well as working as a guitar technician for Jamie Moses and the many guest players on worldwide shows, he also directed all of their film releases and even played percussion on stage with them numerous times.

After a musical hiatus of some 10 years Kenny returned to playing with a cover band, then started working as a dep with the Supersonic 70s Show. He was invited into Moritz in October 2015 and worked on finishing the About Time Too album as well as co-writing some of the songs. He was of course first choice for directing the Moon and Back video which features his son Cody. 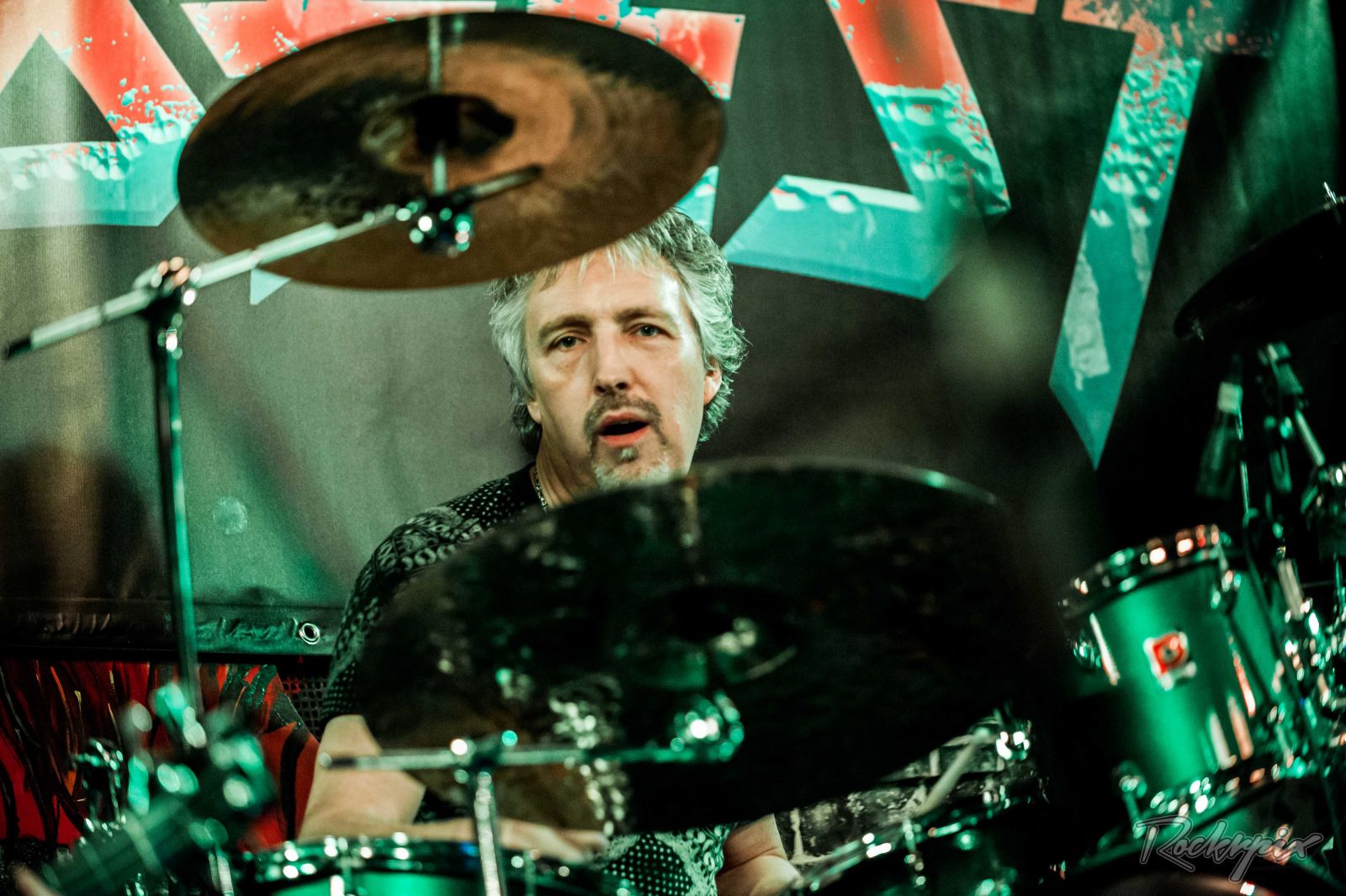 Russ is another top flight musician, starting out aged 9 and being taught by among others - Bill Bruford. Russ has spent much time working in tribute shows, among them Fragile (Yes Tribute), Book of Genesis. He also has worked for Curfew, Claire Hamill, Vienna Circle and Tantalus and often works as a dep for many touring bands.

He has toured worldwide and recorded many albums including three with the UK jazz fusion band Curfew.

In 2012 he made it through to 2nd place in the UK finals of the Roland V-Drum championship in Birmingham.

As well as playing for Moritz, Russ is currently touring with the premiere Elton John tribute show Ultimate Elton and The Rocket Band as well as the 80's artist Owen Paul,. He also teaches drums and percussion at several schools around the UK. 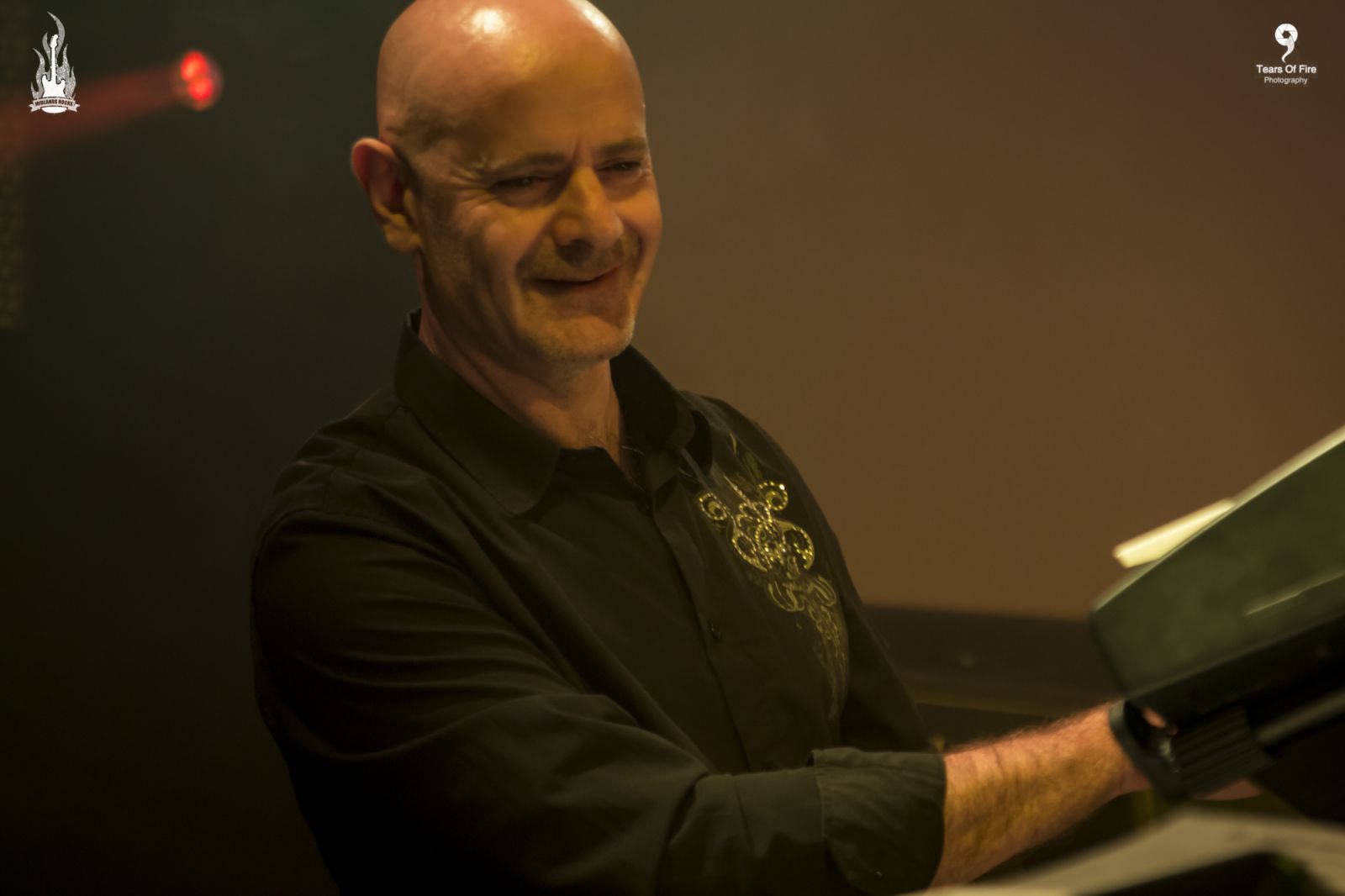 Chris began learning classical piano at the age of eight and went on to discover the wonders of rock music in his late teens. Soon after he started gigging with many local rock and function bands and was later introduced to the renowned guitarist Phil Hilborne, joining his band as a regular member for over fifteen years.

During his time with Phil he has been privileged to appear with many well known artists including John Entwistle, Gary Moore, Dave Gilmour, Ted McKenna, Frank Gambale and Geoff Whitehorn.

In 1991 he was recruited as keyboard player for ex-Searcher Tony Jackson's band The Vibrations and toured the UK with them for over four years often appearing with many other well known 60's acts. When Tony retired from live performing the rest of the band stayed together to form the Soul Detectives.

More recently Chris has worked in the UK and abroad with various bands and acts. He was also part of a band headed by Nicko McBrain (Iron Maiden) and Phil Hilborne whose live performances sometimes included guest appearances of artists such as Bruce Dickinson (Iron Maiden), Bernie Marsden (Whitesnake) and Uli Jon Roth (Scorpions).